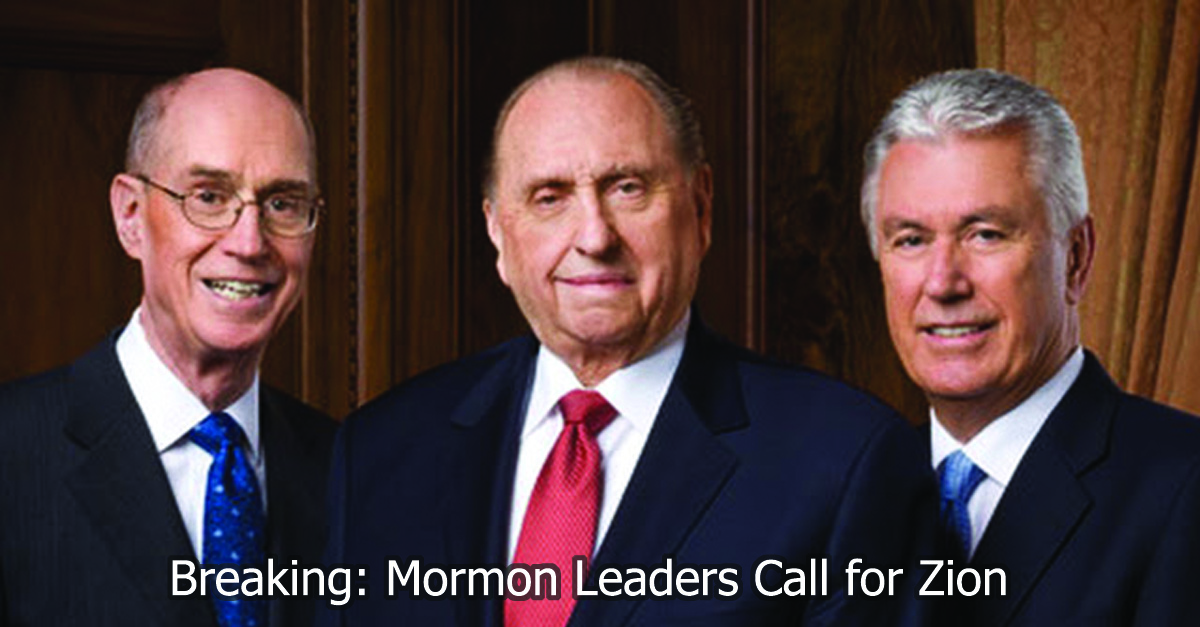 SALT LAKE CITY – In a brazen announcement Friday morning, the Church of Jesus Christ of Latter Day Saints has released a new “Proclamation to the World” in what they have titled, “A Call for Zion.” The proclamation comes one day before it’s annual General Conference in Salt Lake City. More details will given by church leaders as the proclamation will be read and sustained by members in Conference on Saturday morning.

When President Thomas S. Monson was asked about the proclamation he responded, “After much reflection and pondering over the state of the church and the future of this people, I was visited by an angel of the Lord. The changes taking place come as a direct message from the Lord through an angelic minister.”

President Monson was very cautious to let out any details of the angelic visit, or to answer questions about the new proclamation. He did inform us that the visitation came as an answer to his praying and pondering over a verse of scripture, D&C 70:14, which reads: “Nevertheless, in your temporal things you shall be equal, and this not grudgingly, otherwise the abundance of the manifestations of the Spirit shall be withheld.” There was no comment when asked if there was a feeling that there is an absence of spiritual manifestations within the church.

This announcement is the biggest shift in the church since the controversial priesthood change in 1978. While that announcement was heard far and wide and the effects have been far reaching, this proclamation will affect every Latter Day Saint and perhaps the entire world. The proclamation calls for all endowed Latter Day Saints to live the law of consecration, reminding them that they covenanted to do so as part of their Mormon temple ritual. Perhaps this will mean a flood of high priced real estate will soon hit the market.

When asked why it has taken so long for the church to begin the effort to build Zion, a concerned President Monson expressed, “It’s time that we seek for Zion. The Lord has made it clear to me that we have shirked our responsibility for far too long. I am pained to see our continued failures to become one.”

The hallmark of Zion is that there were no rich or poor among them. It doesn’t take a scientist to know that church members are represented by every level of rich in the world, as well as every level of poor. President Monson was very somber at moments, when asked why he seemed so pensive, he quietly replied, “Read Jacob chapter 2 in the Book of Mormon, then you will begin to understand the weight on my shoulders.”

When President Russell M Nelson of the Quorum of the Twelve Apostles, was asked about the call to be equal in all temporal things, he sternly replied, “When I found out about the Liahona Foundation I was struck with horror. How can we allow Latter Day Saint children to literally starve? The foundation said it would take six million dollars to completely pay for every child for an entire year. Living this new law will end poverty once and for all among the Latter Day Saints, that’s the beauty of it. Having to give up our riches will be the challenge for most, including myself.”

Some of the major components of the big announcement include the following major changes.

Church PR Director, Jennifer Hughes when asked about the major announcement, responded after a moment of reflection, “Our Lord and Savior was in fact homeless, it will be a test for our people to bring in those who are in desperate need. This will require a shift in our thinking and our organizations.”

The church has a large list of assets they are planning to sell off as part of the first stages of this monumental shift. Buildings, Large tracts of land, orchards, dairies, hunting ranches, and many other assets were listed in a forthcoming press release. The leaders emphasized that the church needs to set the standard and be the example to its members.

President Dieter F. Uchtdorf was a bit flushed when he was asked about his multiple properties worth well over 1.5 million dollars on today’s market. He hesitated, then responded, “I have much to consider, much to do, it really, … I need to do whatever is necessary to bring about Zion, and if this means selling all I have, I will do it.”

Leaders of the church have a social media plan centered around the hashtag #call4zion to help flood the earth with this message. Leaders have asked that members prepare for tomorrow’s announcement by joining them in a fast and through much personal prayer.