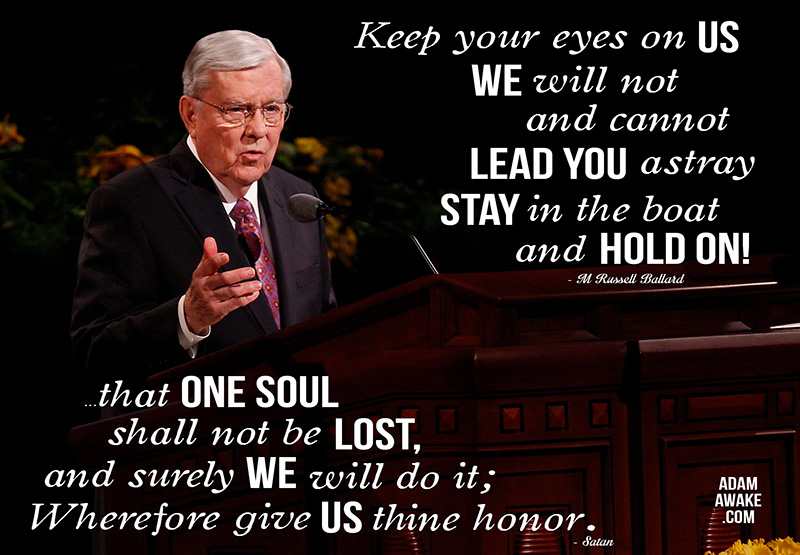 The thought should be pondered: Will God remove the agency of one of His leaders? If someone is called of God, can they err and lead us astray?

Joseph Smith seemed to be warning the church about this when he referenced Ezekiel 14.

President Joseph Smith read the 14th chapter of Ezekiel — said the Lord had declared by the Prophet, that the people should each one stand for himself, and depend on no man or men in that state of corruption of the Jewish church — that righteous persons could only deliver their own souls — applied it to the present state of the Church of Jesus Christ of Latter-day Saints — said if the people departed from the Lord, they must fall — that they were depending on the Prophet, hence were darkened in their minds, in consequence of neglecting the duties devolving upon themselves, envious towards the innocent, while they afflict the virtuous with their shafts of envy (Teachings of the Prophet Joseph Smith, p. 237).

What was “that state of corruption in the Jewish church?” Were they looking to the arm of flesh, their leaders, as their idols?

“.. Every man of the house of Israel that setteth up his idols in his heart, and putteth the stumblingblock of his iniquity before his face, and cometh to the prophet; I the Lord will answer him that cometh according to the multitude of his idols; that I may take the house of Israel in their own heart, because they are all estranged from me through their idols” Ezekiel 14:4

Have we turned the prophets into idols?

As we follow President Monson and try to be more like him, we will inevitably succeed in being more faithful disciples of the Lord Jesus Christ. (April 2014, Follow the Prophet)

Um whatever happened to, “the keeper of the gate is the Holy One of Israel; and he employeth no servant there.” (2 Nephi 9:41) Remember that when Lehi followed man in a white outfit, he was lead into a “dark and dreary waste.” He had to be delivered by calling on the Lord and praying for mercy. (1 Nephi 8:5–8)

To think that God will remove their agency, or ability to lead us astray, is really no different than what Satan was proposing. In one case you’re claiming God will nullify a prophets agency and their ability to lead us astray, thus their followers are all saved; and in the other, the followers of Satan have their agency nullified, therefore they are all saved.

Sounds like the same plan. Perhaps it was Satan’s plan to co-op the Lord’s church after all. Perhaps God knew this would happen all along. Nephi knew some group would call themselves “Zion” and they would cry “all is well” when they were actually being led carefully down to hell by the devil. Yet they will be pacified a lulled asleep by their worldly success and wealth, while also claiming that God had given His power to men. (2 Nephi 28)

The quote in the meme above is from the talk, Stay in the Boat and Hold On! It is compared with a verse from the Pearl of Great Price, Moses 4:1. You should ponder the similarities.

Ironically, the scriptures gives us scenarios in which God will “cease to be God,” (Mormon 9:15,19) (Alma 42:13,22,25) yet somehow the brethren will not “cease to be God.” Well, they aren’t really God, but most members speak of them this way by saying that the church (the Lord) and it’s leaders (the Lord) can’t do us wrong. Therefore they might as well be God, because they can’t do wrong, and everything they say is inspired. Can you say Idolatry?

Is there scriptural precedent for a true prophet leading someone astray? Have you read 1 Kings 13? I would suggest you study it over with the Inspired Version or the JST.

Even if you decide it’s a good thing to follow a prophet, just know that even following true prophets will only land you a seat in the Telestial kingdom.

For these are they who are of Paul, and of Apollos, and of Cephas.

Perhaps we need to stop trusting in the arm of flesh. Seek the Lord.

O then, my beloved brethren, come unto the Lord, the Holy One. Remember that his paths are righteous. Behold, the way for man is narrow, but it lieth in a straight course before him, and the keeper of the gate is the Holy One of Israel; and he employeth no servant there; and there is none other way save it be by the gate; for he cannot be deceived, for the Lord God is his name. (2 Nephi 9:41)